I was asked to repair/refurbish the “R3” (now RV54 with the new legislation) repeater from URE Guadarrama, usually running in a privileged location in the Alto del León (1.150 m), around 50Km north-west to the center of Madrid. The repeater had developed severe loss of sensitivity and also TX range. Both the repeater and the duplexer had various problems. This is a brief explanation of what was done to both the Icom IC-RP1510 and the Bird Technologies Vari-Notch Duplexer, with a few pictures.

The repeater was very dirty and corroded from being in a hot-cold and humid environment for many years. It was not hard to understand why it was performing poorly: 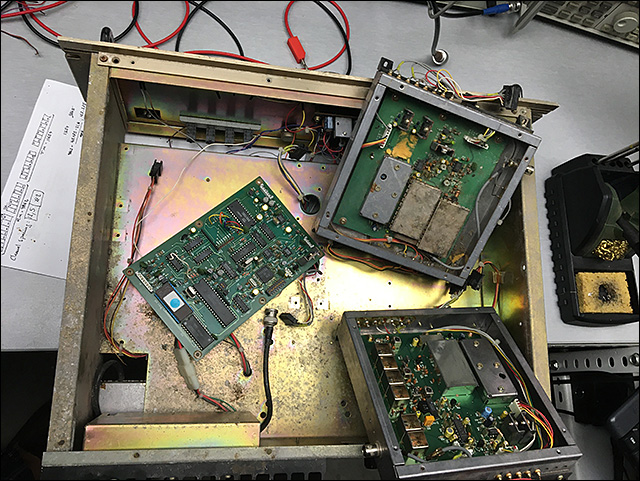 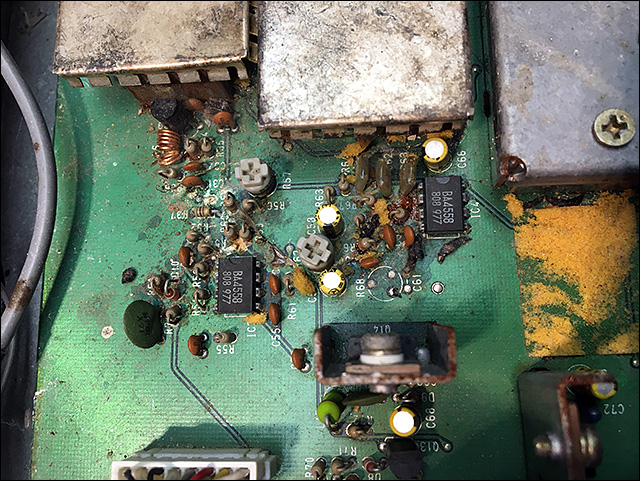 Following the RX signal path with the active probe, I found a tiny capacitor in the tuned filters, C3, was corroded and the wiper was not connected to the corresponding pin. That was causing a severe drop in the signal, which explained the poor sensitivity of the receiver. After fixing, the receiver started hearing clearly -120dBm signals as expected:

Lots of bugs had made their home in it, and many spider skins were found: 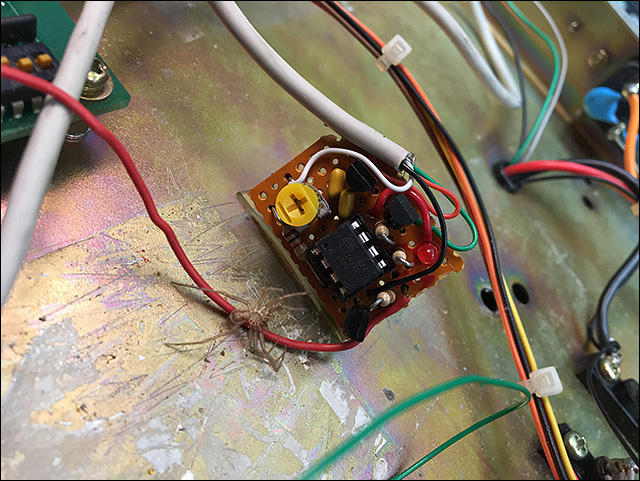 The 220V power supply was missing the transformer, so the large capacitor, voltage relation circuit and beefy heatsink were useless, and were removed: 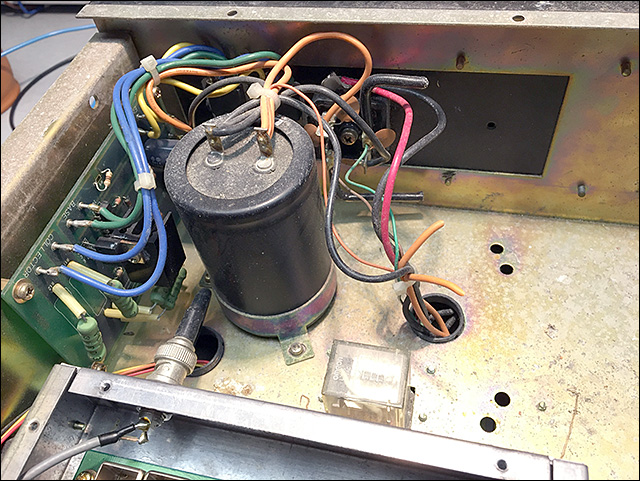 Emergency repairs and mods had been done in a few places: 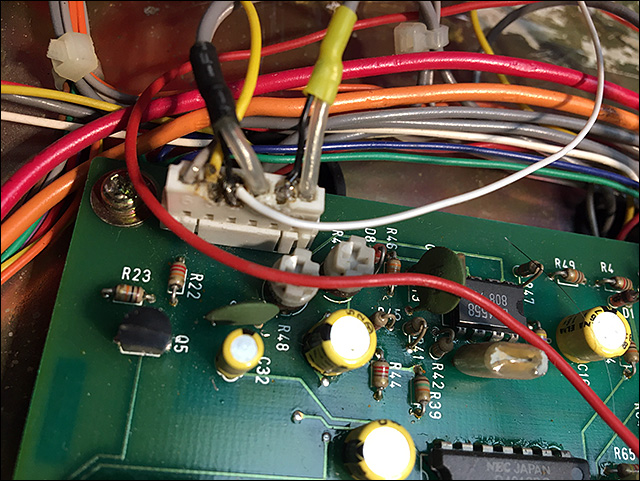 An additional squelch open signal was required for the new controller, and it was available at the base of Q4 (red), at the output of the noise detector: 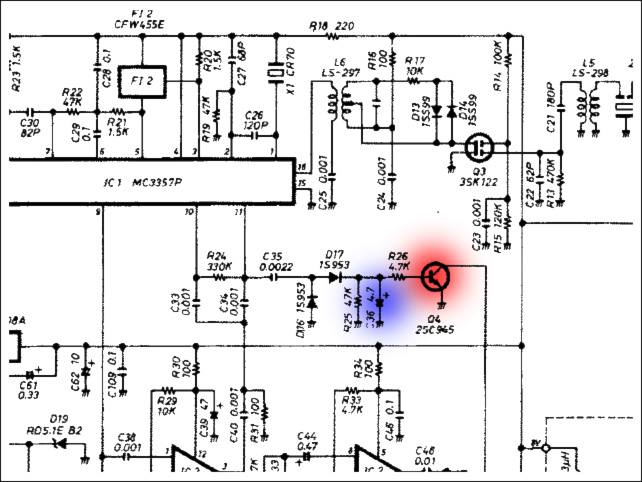 A 2n3904 npn transitor was installed in parallel with Q4, and the gray cable was routed to the feed-through capacitor C96, which was not used: 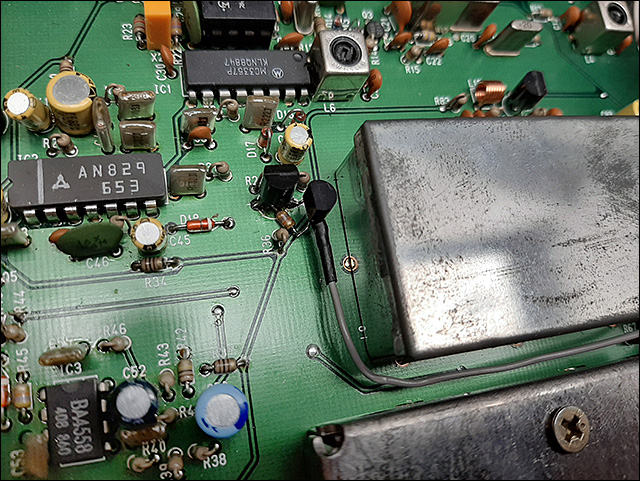 I decided to get rid of the old controller and replaced it with a nice DJ0VL REL-05 controller. All wiring was rebuilt, and necessary modifications were made: All unnecesary cables, relays, posts and accessories were removed and the unit was cleaned and completely rewired for the new controller: 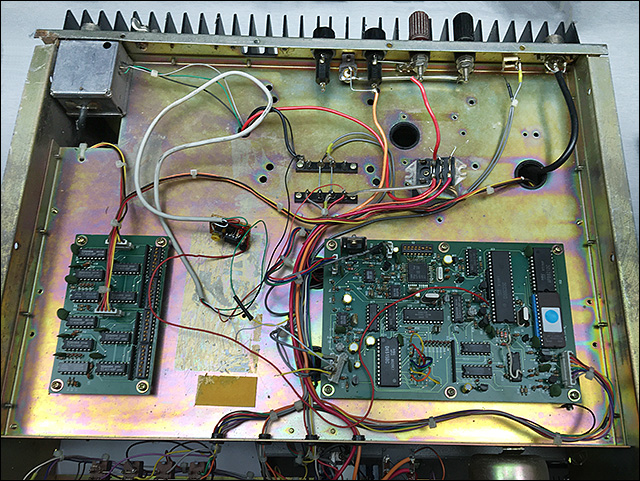 Before, with the original controller 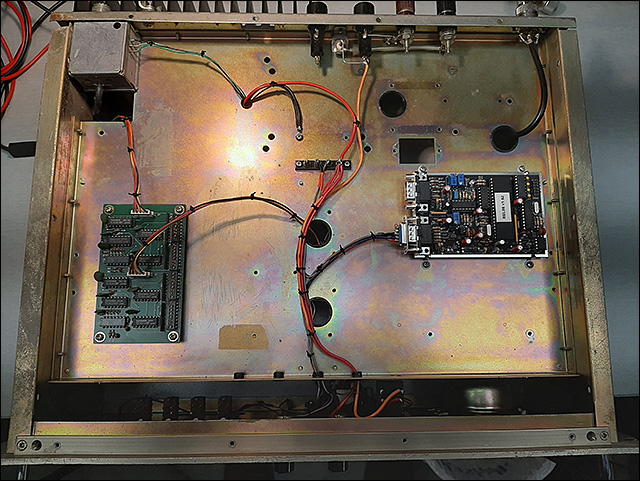 After, with the REL05 and renewed wiring

The metal cover plates were missing so two aluminium ones were built. The AC-DC regulator heatsink was removed and a cover was made to close the opening that it left on the back of the repeater housing: 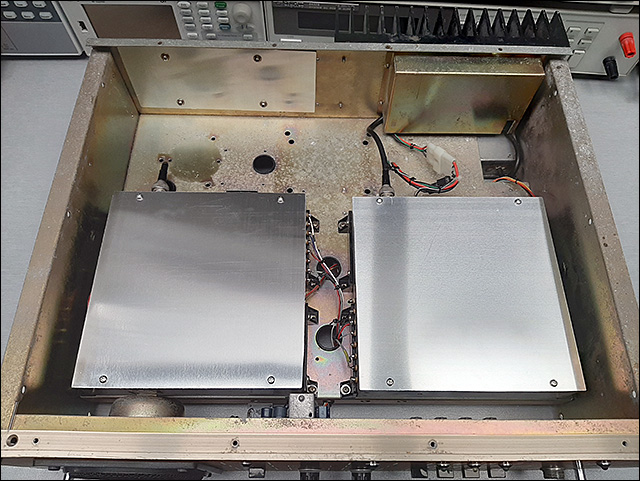 The power amplifier was damaged and was delivering less than 3 watts, so the amplifier board was cleaned and a new hybrid amplifier was installed. The PA controller board on a separate can next to the TX antenna connector had to be fixed because the variable pot that adjusted the power had been destroyed with a screwdriver. After these works, 25W were easily obtained at the output: 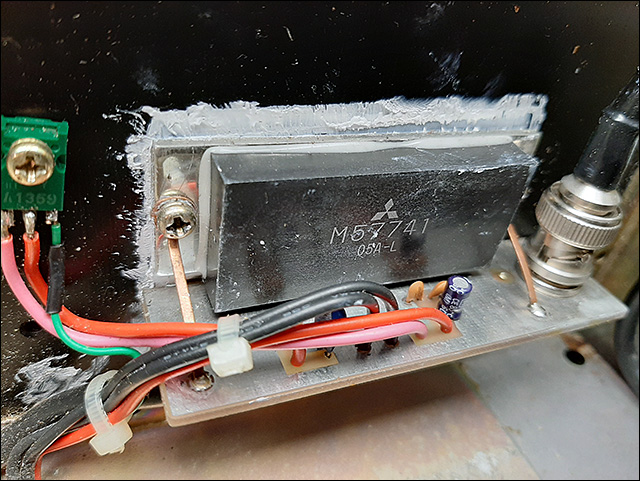 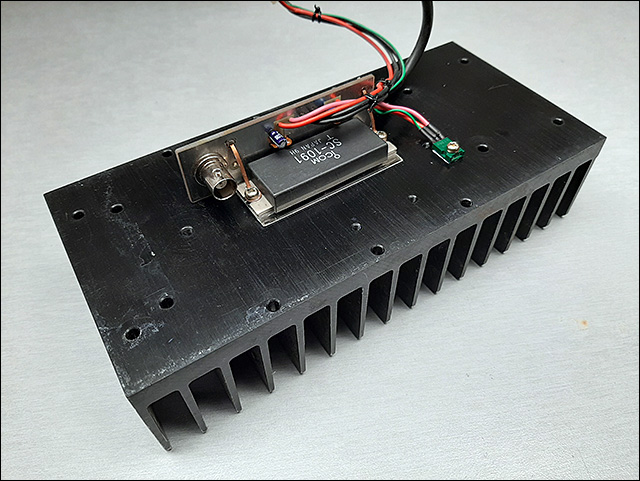 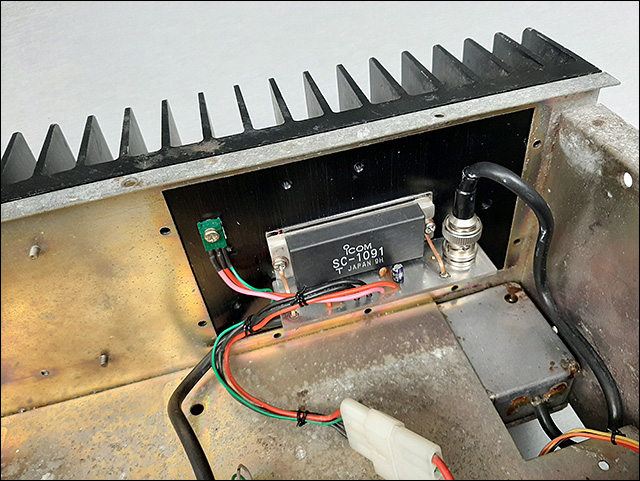 It took me some time to find the maker and model for the duplexer used in the repeater, we had no documentation and the duplexer was missing any kind of label. After going through many pictures, I found it is a Bird TXR28-37-02A Vari-Notch duplexer. This is a type of duplexer I had never seen, with each cavity showing a pass and notch characteristic that allows sufficient rejection with found 6-inch cavities and a single antenna at a separation of 600KHz: 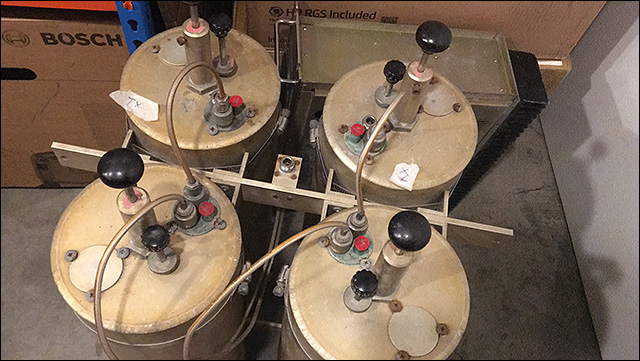 Aging cables had broken jackets and many metal parts were corroded due to humidity: 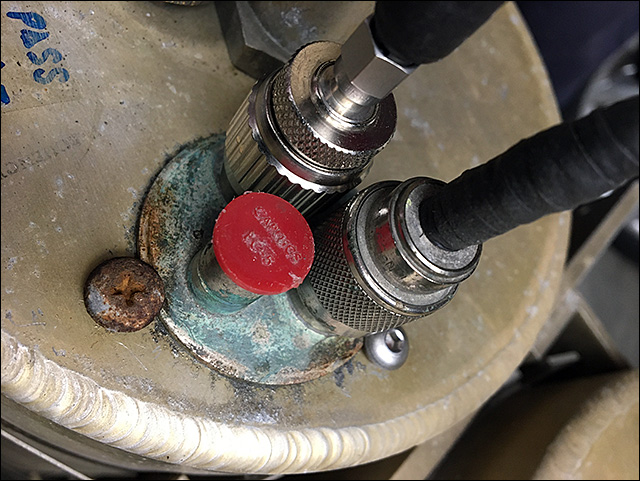 Adjusting the coupling loops was needed, and some screws refused to be removed by normal means so some force was required. Note the tape used to prevent metal chips getting into the cavity: 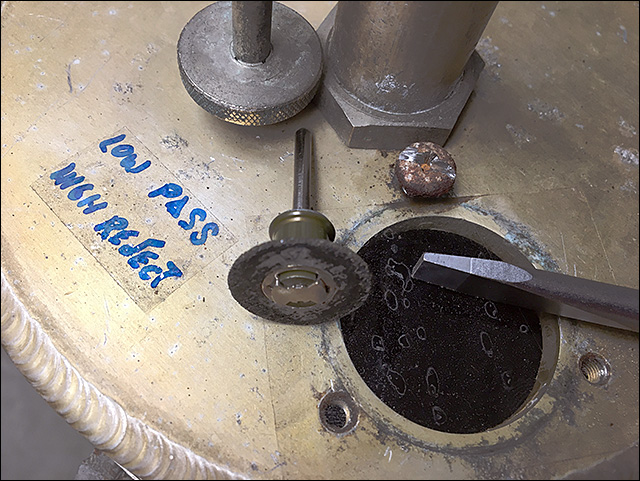 Contact between dissimilar metals had caused galvanic corrosion and the M5 female threads had to be re-touched: 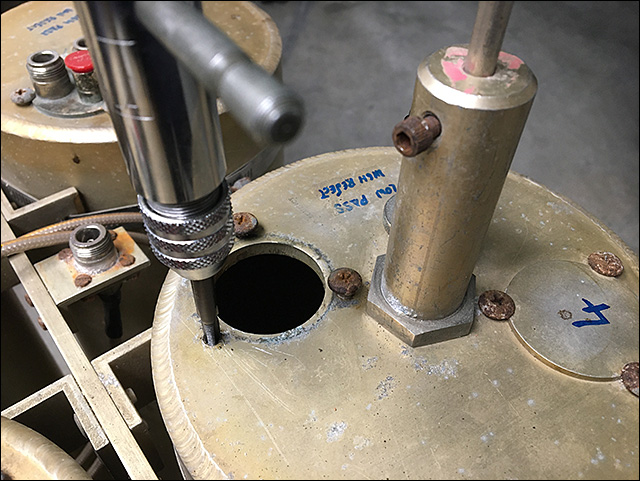 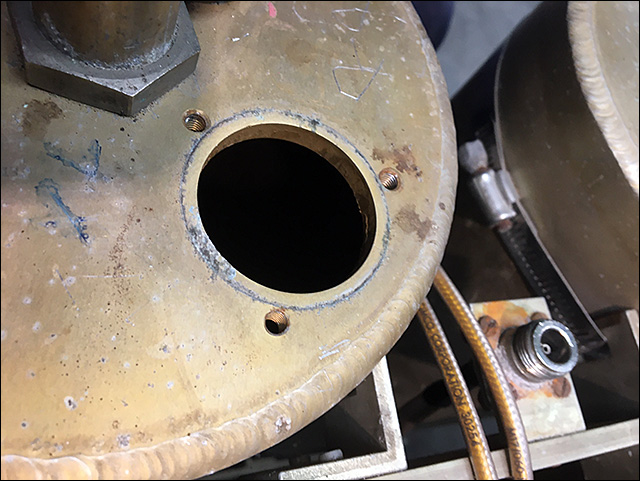 The coupling loops were all silver-plated and were in perfect shape: 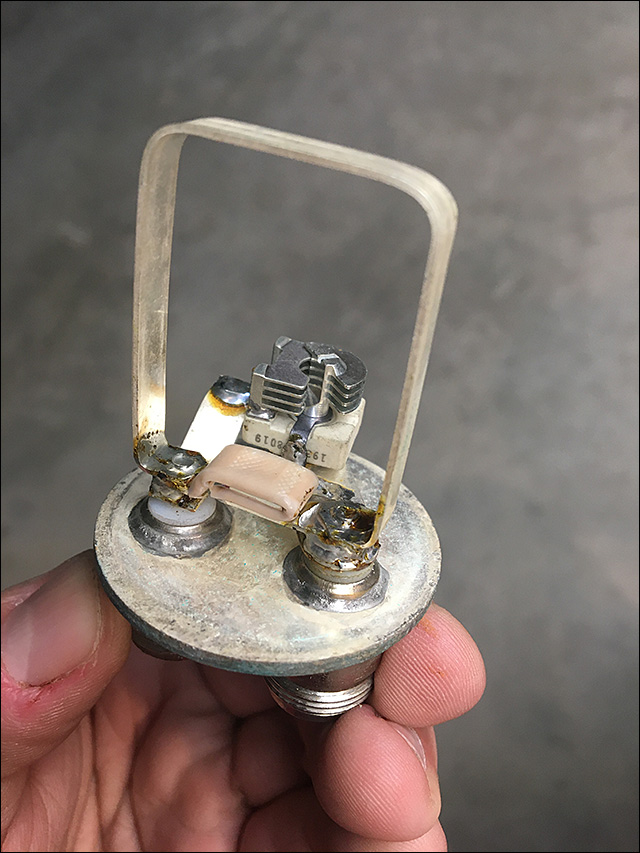 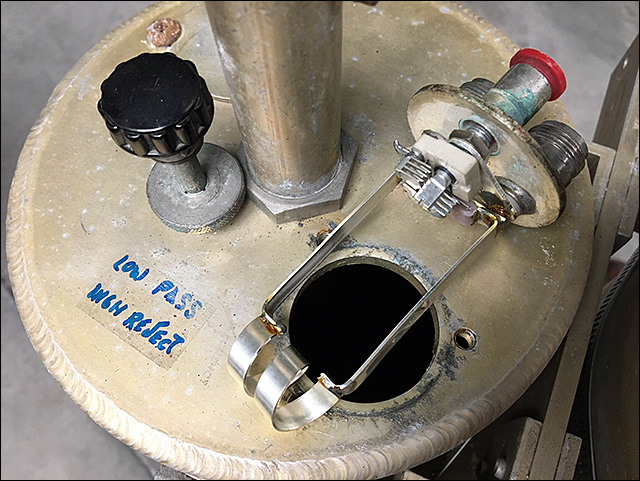 With new screws, cables and all corrosion removed, the duplexer was ready to be tuned: 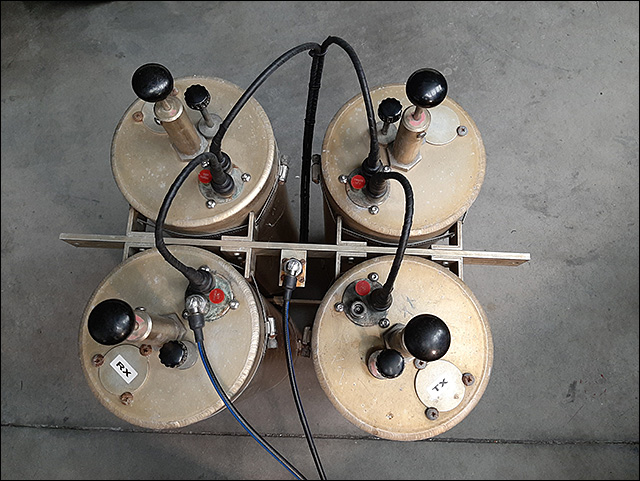 Honestly, this is a hard thing to tune, many iterations had to be performed but I was able to get acceptable performance, only 1.1dB loss in the pass frequency and more than -80dB reject (with just two cavities!): 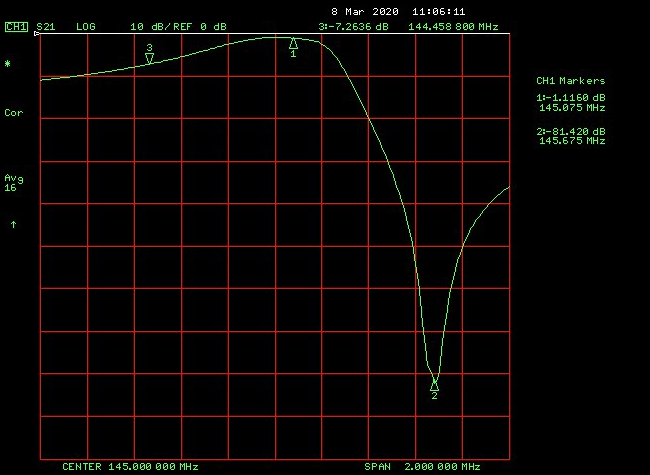 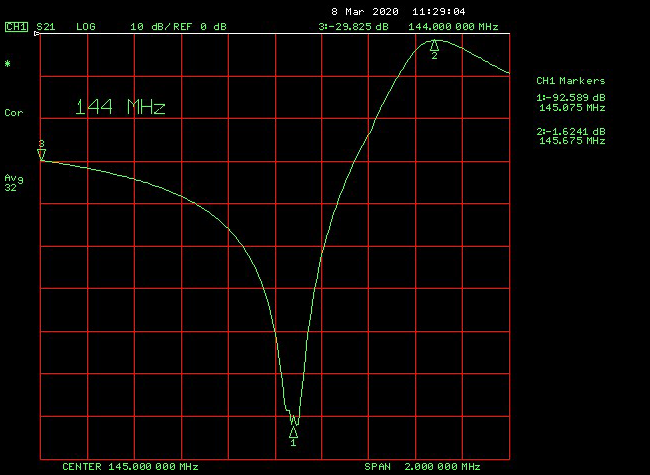 While testing, EA4GZR pointed to an unusual squelch tail that made thru TX before cutting transmission. So there were two squelch tail, the one your radio makes when it closes the squelch and this long tail that the receiver in the repeater was transmitting. I measured it with the scope, and the tail was unnecesarily long. You can see that at marker “a” the RF signal drops and noise signal at C36 starts to rump-up until marker “b”. During that time, noise in the AF path appears during 67mS, and the busy signal is kept low during that time, which causes that noise talk to make it through the TX chain: 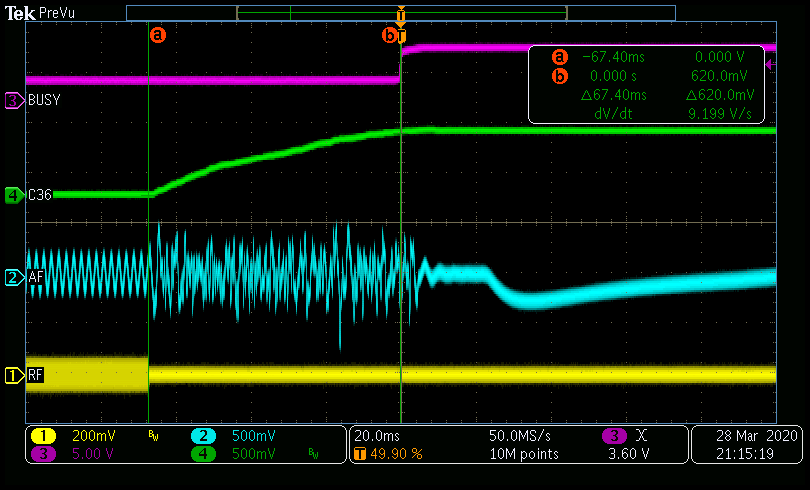 Capacitor C36 (blue) was setting the time for the duration of this tail:

The value of C36 was reduced to 220nF, point at which the squelch tail only lasted a comfortable 1.6ms, barely noticeable now (C36 was inadvertedly left disconnected in the capture…): 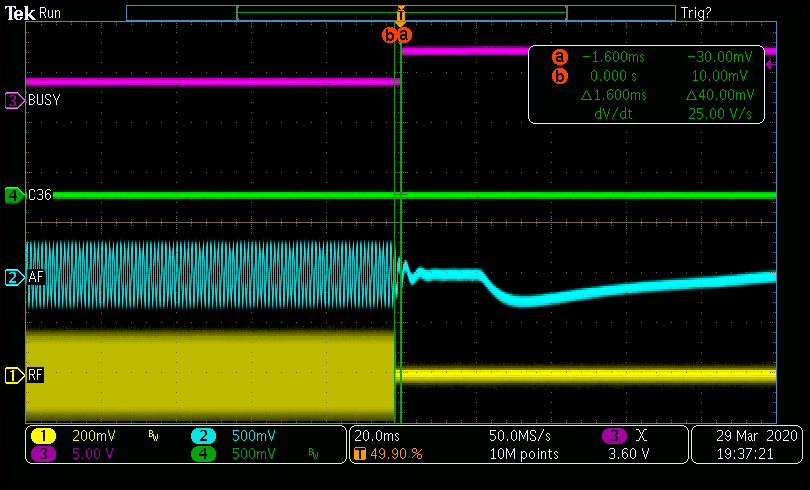 I also found the repeated audio lacking highs, so I set up a 1 second sweep thru the audio frequencies from 300Hz to 2300Hz with the waveform generator modulating the RF gen, and plotted the AF-out of the receiver module with the scope. The muted audio was confirmed in the curve that appeared in the scope: 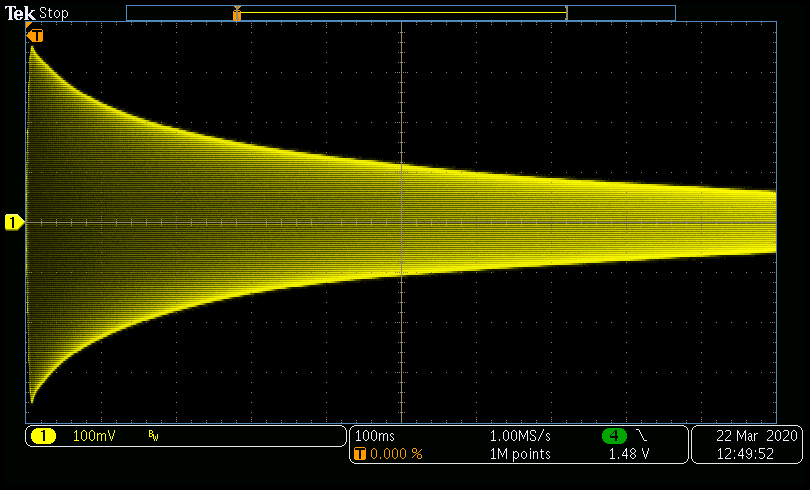 In contrast, the signal available at the discriminator output was not low-pass filtered and was routed directly to the controller AF input, that includes its own adequate low-pass filter. With this modification, the repeater has better audio response than it had before: 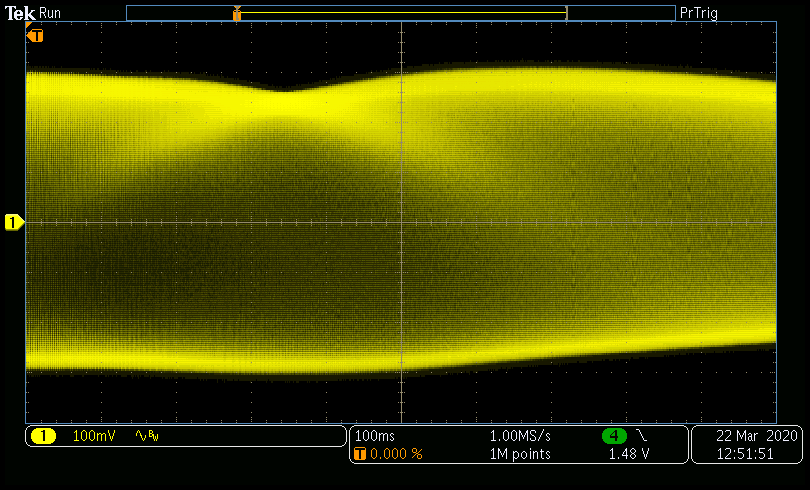 The repeater was reinstalled by EA4BM, EA4GEM and EA4GZR. A power supply from a computer was sitting next to the repeater and generating severe EMI that made us initially think that something was very wrong, but simply moving it away solved the problem. 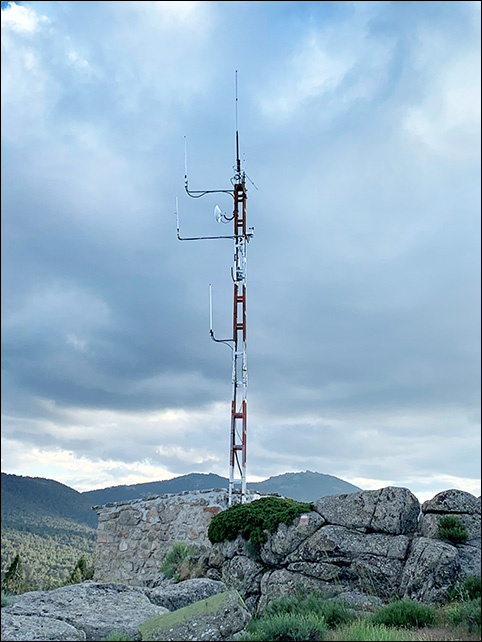