This is a legendary synthesizer with many knobs that allow for direct-access to many functions. It sounds great, looks great, and it is a great tool to learn about analog sound synthesis, but there are better synths now and it is difficult to justify the usual price. I came across a beaten unit, non working and physically damaged for an irresistible price, so I could not resist… This is a short overview of the work I did to recover it.

The synth was cheap for good reasons. It was very dirty, the case had bumps in several places, three knobs had been replaced, some keys did not work and most buttons did not register the presses. Above all, the CPU behaved like crazy, changing quickly through the presets by itself and not always responding to keyboard or MIDI activity. 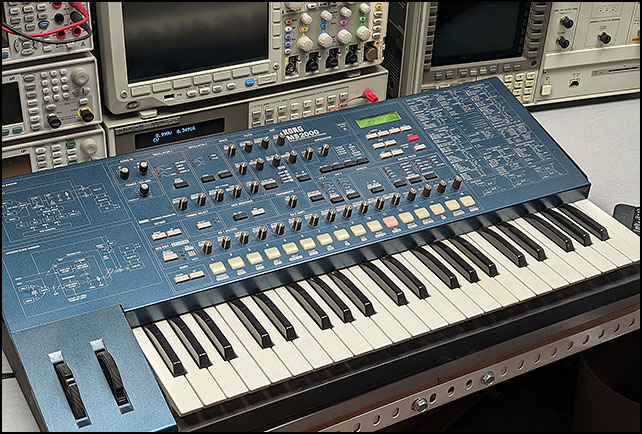 The original wooden side panels were broken and had been replaced with two wood blocks barely shaped to the synth, and attached with the worst screws you could possible choose. The threads on the steel case were damaged and they were so long that one of them went directly thru the headphones connector… ouch! 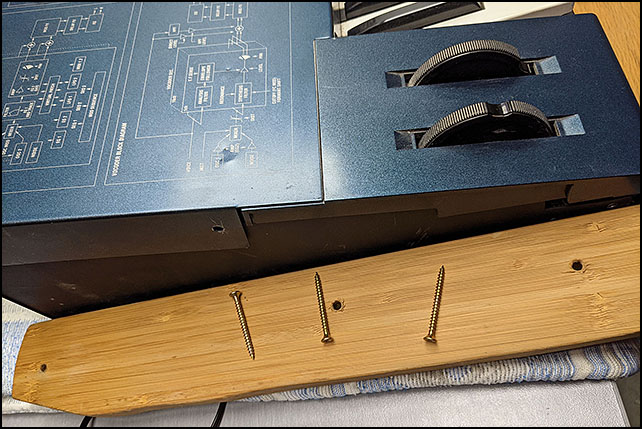 I knew it was going to take long but I wanted to turn this synthesizer from dumpster shape to something beautiful and nice to play.

The first issue that needed to be addressed was the strange CPU behaviour. Presets changed like crazy, controls seemed to be moved by invisible hands and the sound distorted or sustained forever, that is, when it did make some sound/noise… It wouldn’t make sense to restore the synth if it was not working properly so this was the first thing to fix. I took the front panel and main PCBs out and connected them to the rest of components naked on the bench. 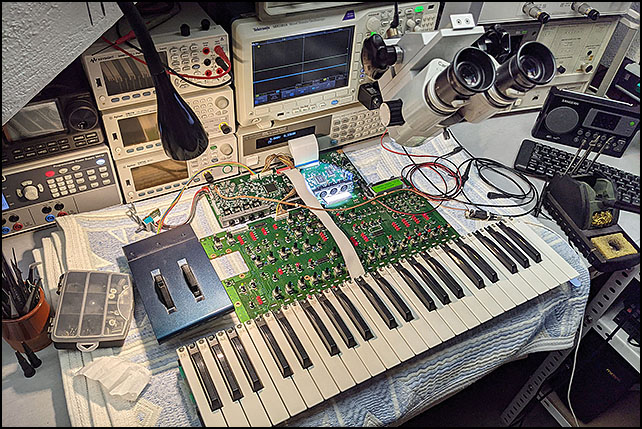 Since it is a common issue in old devices, I suspected the interface cables between the  boards might be failing to make good contact, but everything seemed fine on the oscilloscope scope at the points I could probe.

Under the microscope, I could find some poorly done repairs and some microscopic cracks on the main PCB that were impossible to see without the microscope. The following crack runs over a hole that is 0.2mm in diameter, so just imagine the size of the crack… very small, but enough to break continuity. 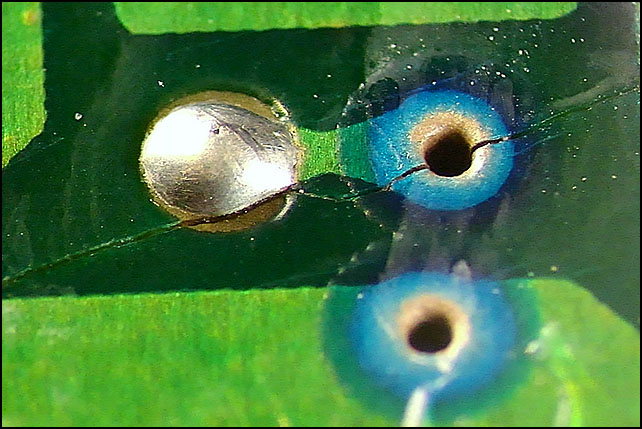 Difficult to see even under the microscope, the crack ran almost across the whole length of the PCB and this problem had not been addressed. They might even have missed it completely 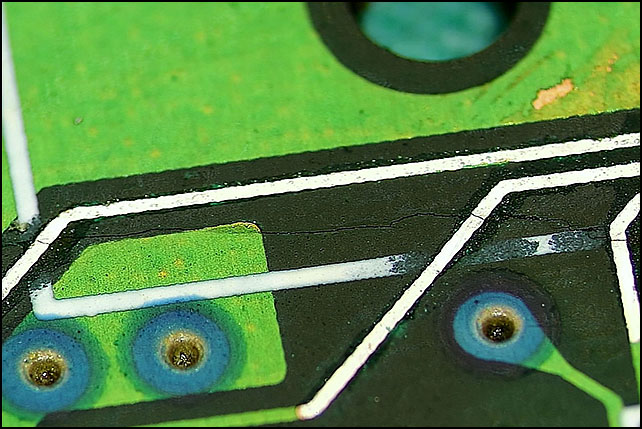 The more obviously damaged tracks had been “repaired” with more or less success by someone. 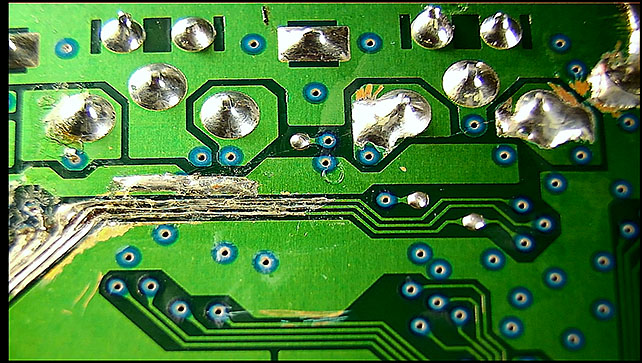 I did not like them so I rebuilt the repair and made sure that no track remained interrupted (luckily it is just a two sided PCB). The 10cent coin is there for size reference. Don’t let the magnification of the picture fool you, this is small stuff. 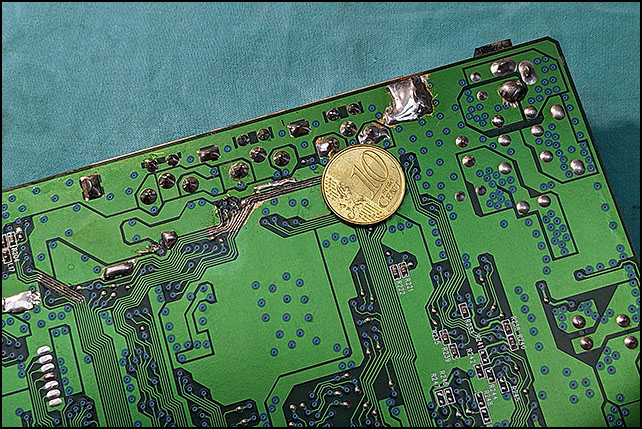 This is the first time I used the Zeiss Digicam adapter with a Sony CCD-based camera with HDMI output that works very well to document the repairs while working on the bench. 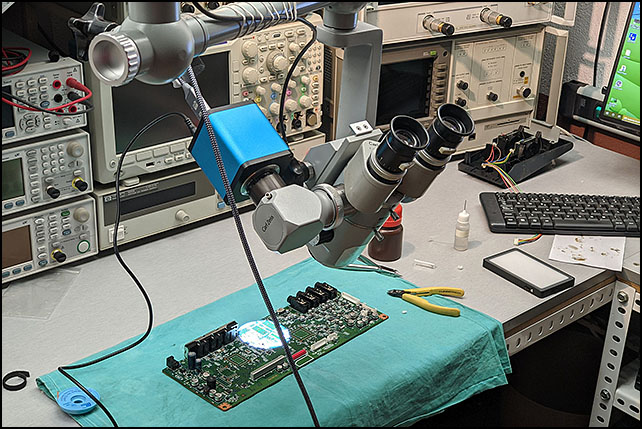 Even with all the tracks repaired, the synth still hang from time to time and still changed from one preset to another unexpectedly. I found corrosion on the soldered pads of the high density ICs, so I decided to remove all of them to clean the PCB and pins and reinstall with fresh solder. I found some forums were people were fixing similar issues by replacing the Motorola DSP, but I think most of then would probably not require to be replaced, just resoldering. 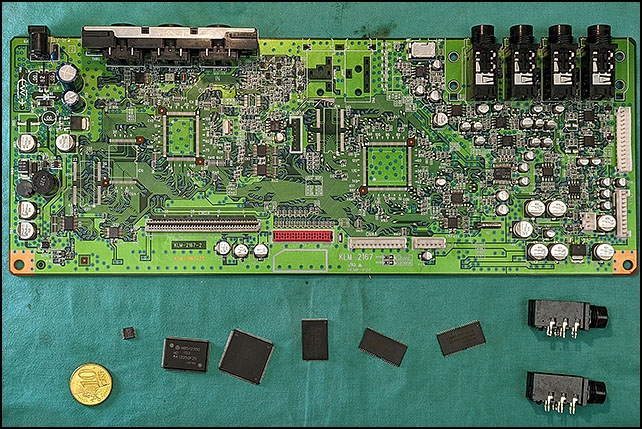 After carefully reinstalling the big ICs, the synth started to behave and sound fine!! Time to fix the cosmetic issues.

Most knobs were only dirty and looked fine after cleaning, but three of them had been replaced with already beaten (and ugly) knobs. Looking for the original knobs, I found some people were asking up 70USD FOR ONE KNOB! That is almost what I payed for the complete synth… no way. I found some nice knobs and I decided to replace all of them for the looks, but they were cheap.

Upon arrival, I found that the flat side of the D-shaped shaft was on the wrong side and the marker pointed to the wrong direction. I decided to completely remove the flat key and leave then round. By enlarging the inner diameter, I could use some heat shrink tubing to provide a tight press-fit on the encoder shafts.

The knobs had just the right size for one of the ER collets so I could turn them without scratching the surface. 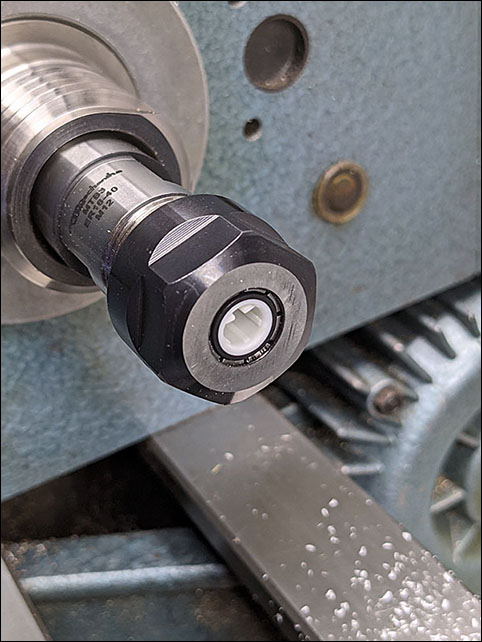 The sharpest tool I had on hand was a four-flute HSS milling cutter and I used one of its lips to turn the inner diameter of the knobs. 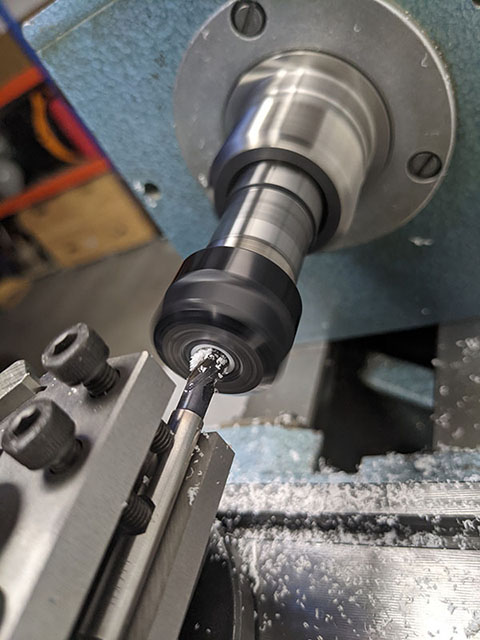 By removing the key just to the right depth, I could make sure that all of them would consistently go to the right height once installed, just above the surface of the front panel. They came out very clean. 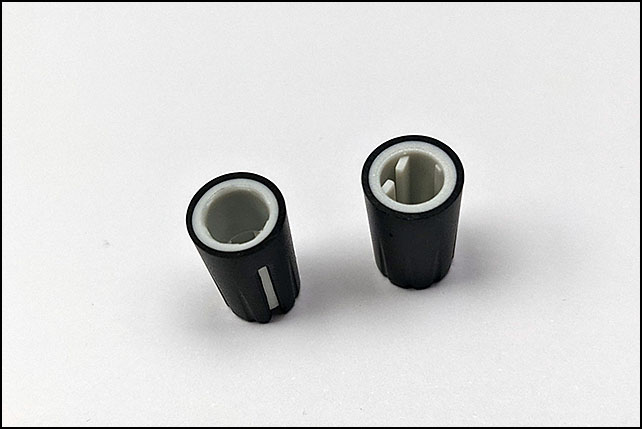 I added heat-shrink tubing to the encoder shafts to provide some grip for the knobs that were no longer keyed. 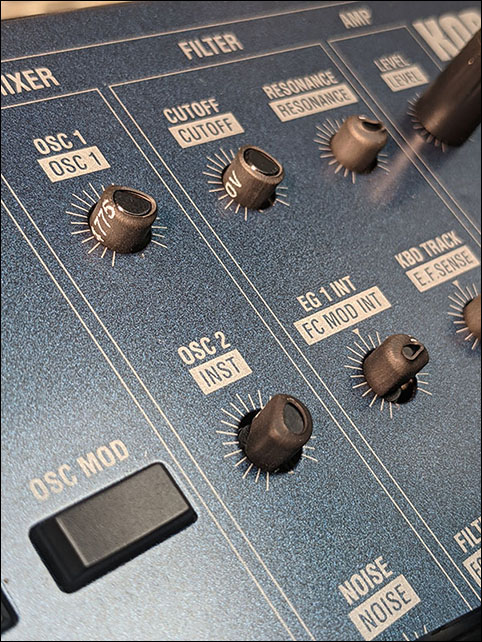 And here they are, all installed on the clean and restored front panel: 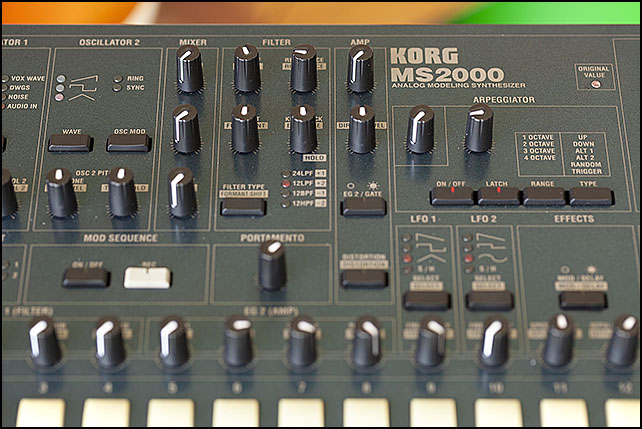 Some keys were not working fine, and they were very greasy and scratched. 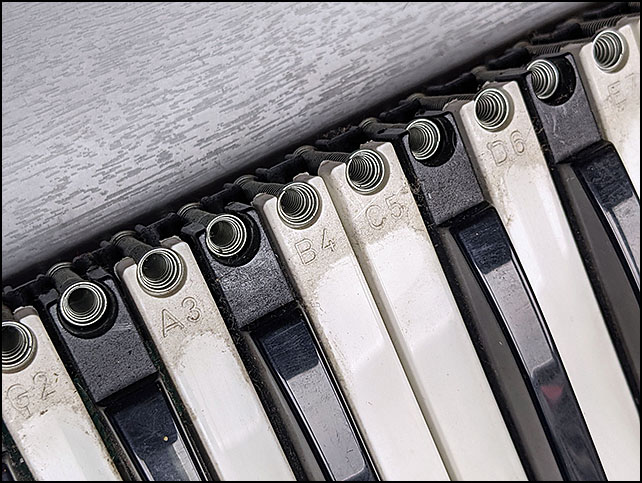 I removed all of them and gave them a nice bath, after which the white ones went to the retr0bright treatment (wrong white balance, not actual color) 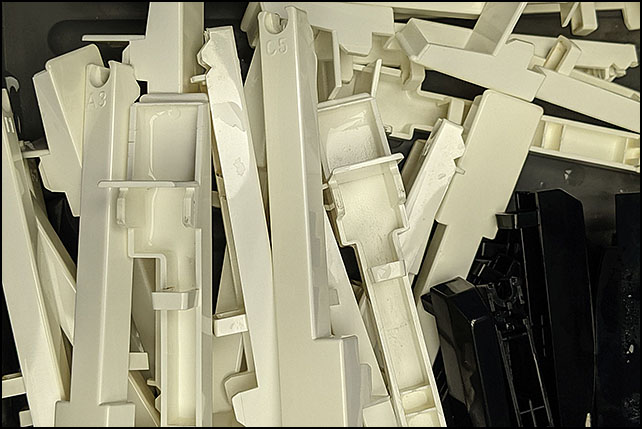 After polishing the keys one by one, the keyboard looks fantastic. Cleaning the PCB and rubber pads under each key solved the failing key presses. 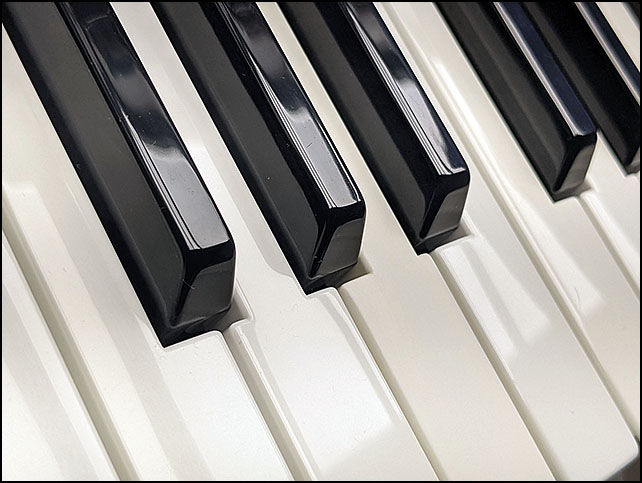 The 16×2 LCD display is originally protected with a thin plastic that was dirty and very scratched. I tried to clean and polish it but the result was not good. Finally, I replaced it with a microscope slide, made from real glass.  Since glass is heavy I did not want to fix it with double-sided tape. The slide was glued to the back of the front panel with UV curable resin. I did not need to cut it because luckly there is plenty of room. The menus are now a lot easier to read and it won’t get scratched again so easily. 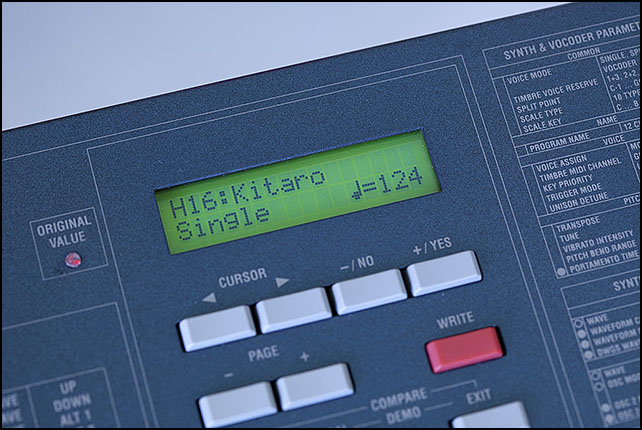 The buttons were not only dirty, they were even sticky to the touch. 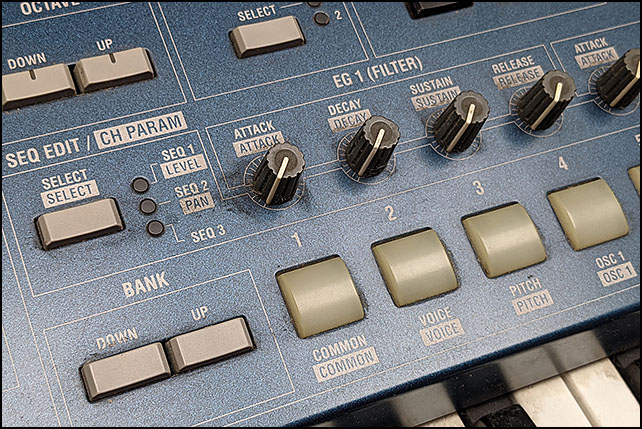 The complete front panel was disassembled and the buttons went to the ultrasonic cleaner. The 16 “white” square buttons show some haze that I was unable to remove, even after retrobrighting them. The small lightpipes that go over the leds are made from a dark plastic, that is why the LEDS shine so dim under normal lighting. 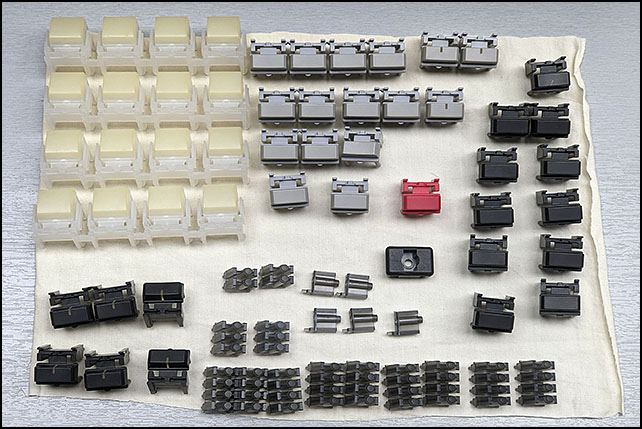 The wooden side panels

I’ve had this piece of beautiful wood lying around for years, waiting for its moment. It had a few cracks but it seemed it I could fit the two panels in 100% healthy wood. I would take the chance and also make them thicker. 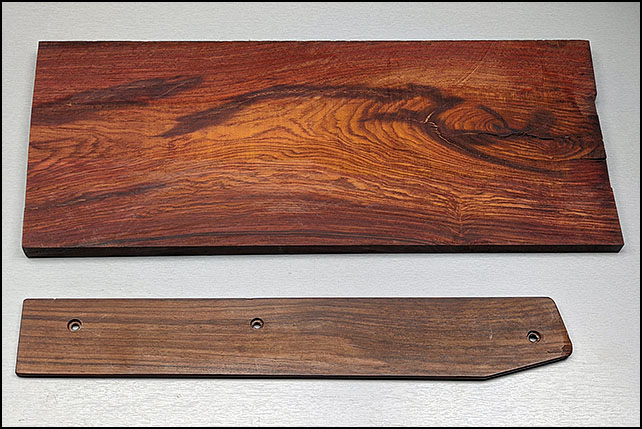 To create an accurate model, I used the old, thin and discolored panel (OMG, look at the staples to “fix” it) as a template to draw the dimensions on a large piece or paper. I extended the flat lines to find their intersections and get accurate dimensions. 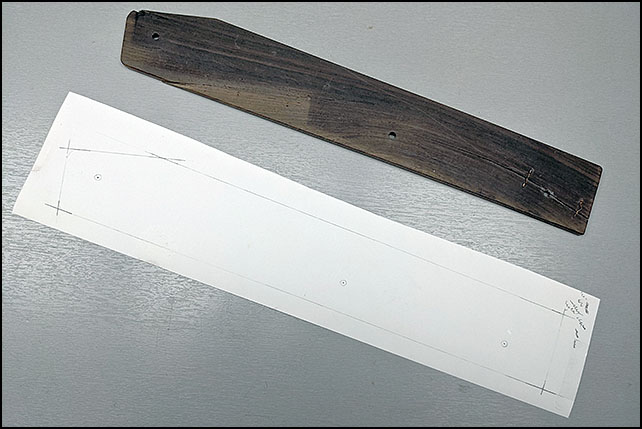 I used the CNC with a very thin drill bit to accurately get the coordinates of the relevant features (hole centers and line intersections. 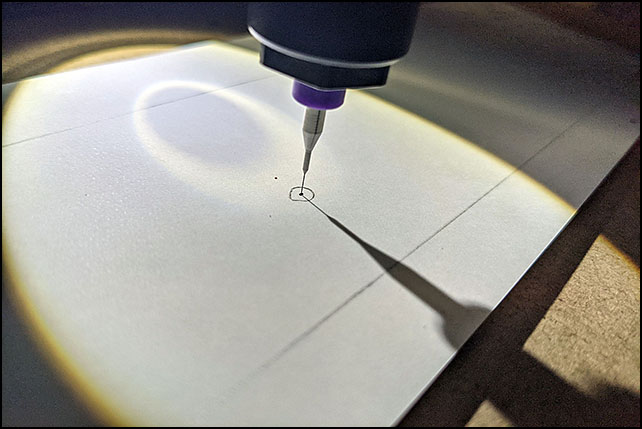 After entering those coordinates in Fusion 360 I only had to round the chamfers and the 2D sketch was ready. 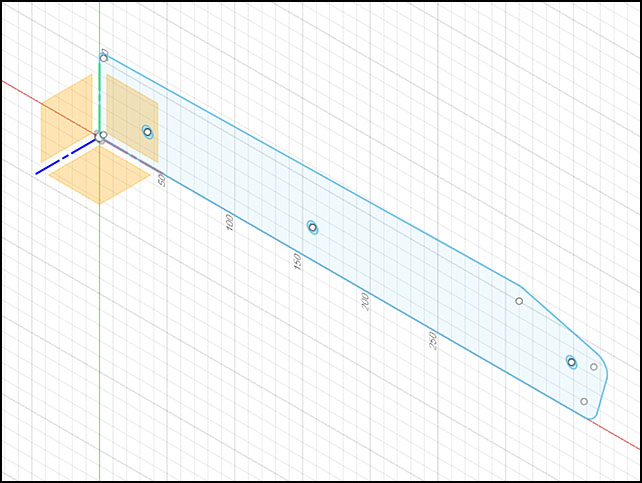 After creating the 3D solid, I created a toolpath for the 3mm milling cutter and simulated running the program in Fusion. 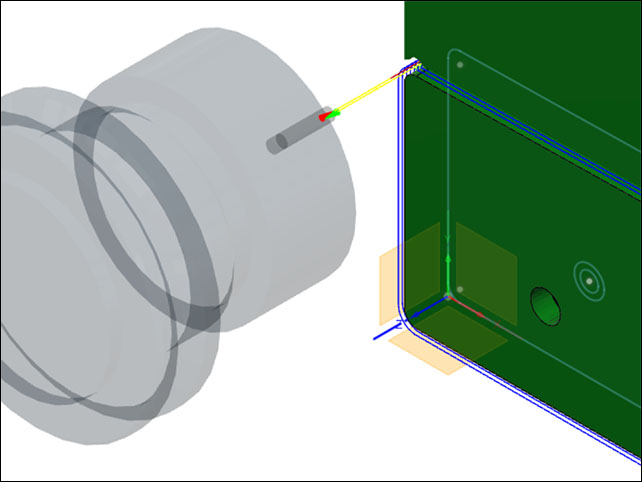 When the speeds, feeds, and rest of the parameters looked good (I had no previous experience with this wood), I routed the panels, and the finish was quite good. I had previously ran the wood thorugh a thickness planner to save some time on the CNC. 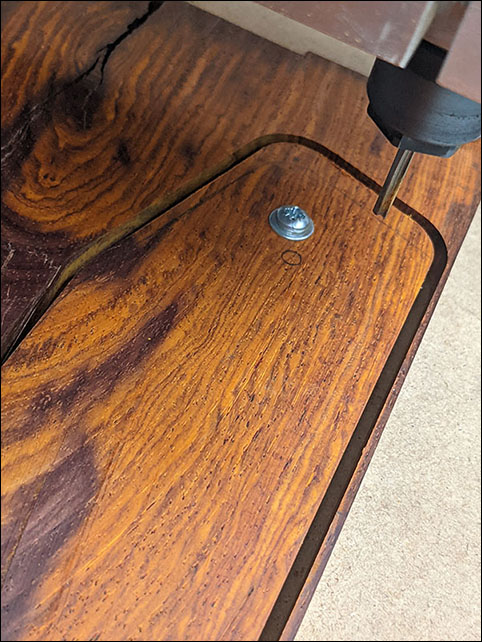 They came up great and they just needed some slight sanding before each layer of lacquer, up to five. 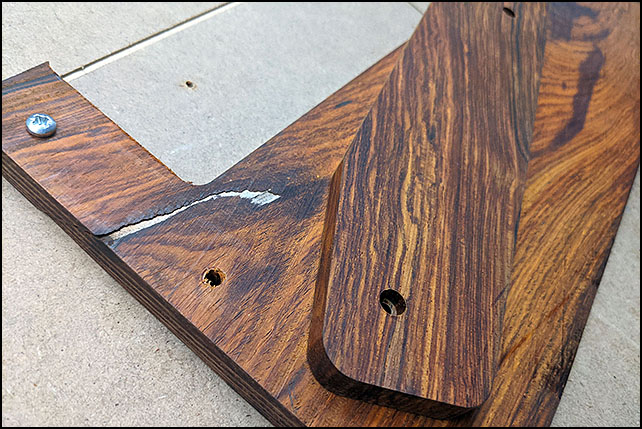 That mate, transparent lacquer I used looks great, it only had the negative effect of darkening the wood, which was expected, there is no way around that. 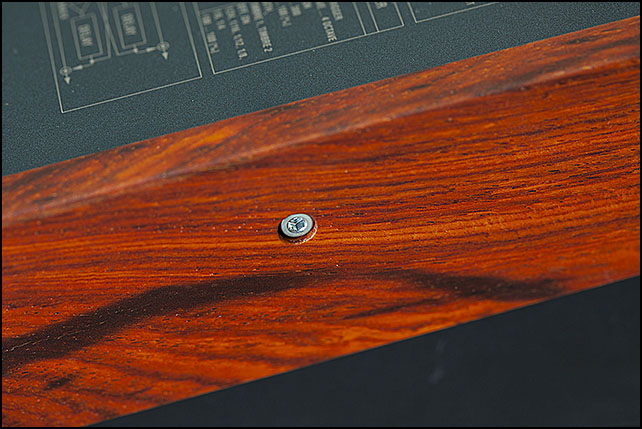 Those terrible screws that had been used had messed up the threads, so I rebuilt them to the next metric size, and the screws seemed to have enough grip. 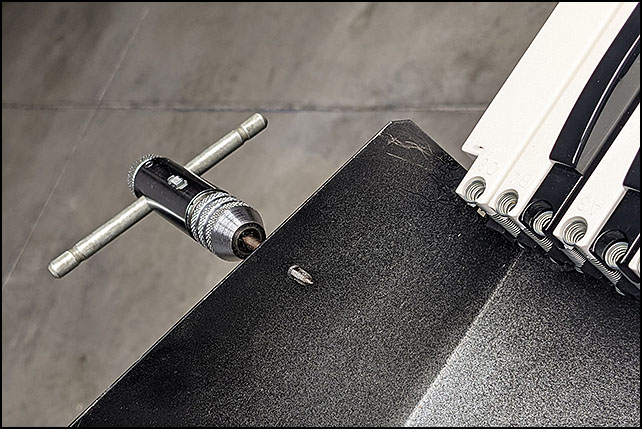 Finally, the synth sounds great, and also looks great. Now I need some time to play (with) it… Many years have passed since I got rid of the equipment I used to record my few songs. 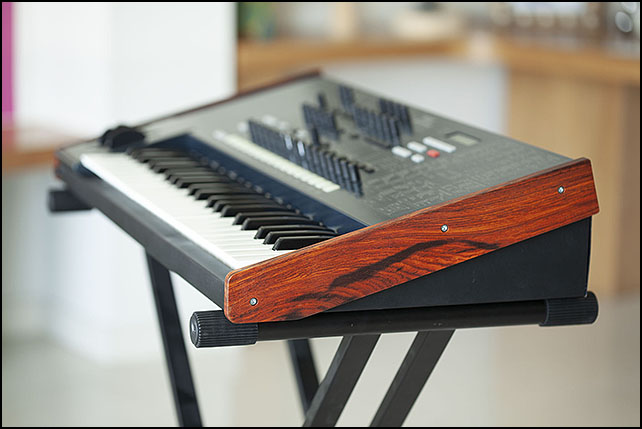