I was happy with the IC-R8500 until one day I used a splitter to connect another receiver along this one to the same antenna at the same time, and I found it was performing a worse than the other. Moderate signals were readable on both but I could hear clear voices on the other than I could not even notice on the 8500. A trip to the lab and I found the sensitivity @12dB SINAD was only -110dBm. The specifications say better than -113dB which is not very far, but the much simpler/cheaper receiver was almost 10dB better at -118dB. This was not right, I had to find why that was.

The converter unit (CONV-B UNIT) in the VNA

Signal from the antenna is sent to the down-converter for frequencies above 1GHz, or bypassed by the two relays otherwise. After the second relay, there is a 20dB attenuator and then a 10dB one. By connecting the RF generator directly after the CONV-B UNIT, sensitivity went up to -123dBm so the problem was in that module. I took it out (not easy) and connected it to the VNA to confirm (that is what I thought) that even with both attenuators bypassed, the signal was being attenuated a lot more than reasonable. Surprise Surprise! The attenuators worked JUST FINE and there was little more than 1dB loss in that unit when they were bypassed. Sorry, I did not capture the plots on the VNA. But how could this be ???

I reinstalled the module with a SMA connector instead of the female N and went to check sensitivity with various combinations of the attenuators. Very interesting, enabling 10dB attenuator only had a 2dB impact on sensitivity, and the 20dB attenuator about 13dB. I made every measurement carefully, I had no explanation for this. The unit seemed to work fine on the VNA but not in the receiver. I used the spectrum analyzer to look of noise in the converter (auto-oscillation or something… ?) but could not find anything. So I removed the cans that shield each attenuator: 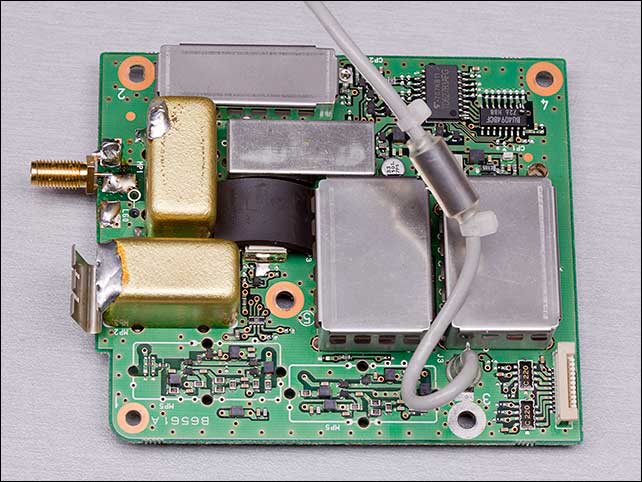 Out of ideas, I started probing with the multimeter to see if I could find something strange. After some probing, I found the voltage of the bypass trace of the 20dB attenuator, in the anodes of D7 and D8, was a bit lower than the equivalent point in the 10dB attenuator. I removed power and went to check the PIN diodes and Q11. And there was it, a leak of 0.9V from Collector to Base. And there was light:

When the attenuator is disabled, “2ATF” is high to bias D7 and D8 and bypass the π-type attenuator circuit. At the same time, “2ATN” is low so Q11 is not turned on. We only turn Q1 on to unbias D7/D8 when the attenuator is enabled. What happens if Q11 has a leak from collector to base? It happens that some current is pulled from that node and the 100 ohm resistor in the 2ATF path causes a voltage drop there. This should not be an issue if the voltage is enough to bias the PIN diodes, if it wasn’t because the leak is not perfect, it is slightly noisy. Any signal somehow injected in the path of the RF signal at this stage has a big impact in the receiver (note that -115dBm is 0.05uV). So this noise caused by Q11 in the RF signal path is giving the scanner a hard time receiving weak signals. I desoldered that transistor and sensitivity went back to the expected -122dBm.

Wihtout Q11, the attenutor is correctly bypassed but not correctly enabled. I could not find a reasonable source for the 2SC4835, a low-noise UHF amplifier. I had a few BFS505 transistors somewhere and they seemed to be a good option. Click on each page to download the datasheet:

Everything assembled back again, the sensitivity is again at -123dBm, as it should:

And the 10dB attenuator now has a 10dB impact in sensitivity, as it should: