The 8753ES VNA is a wonderful instrument, but it has many years on its back, and you may find yourself with a barely readable screen due to poor backlight. I have a dedicated article on converting to LED backlight the Sharp LCD module that Agilent used in the 8753ES (Sharp LQ084V1DG21). But in this one, I will focus on how to replace the LCD module and provide power for the new LED backlight.

Do I need to say you are at your own risk? I have tried to be as precise and clear as possible, but you should not follow these instructions blindly, use your head. Replacing the LCD is not difficult but take your time and be very careful, this instrument deserves as much love as we can give it. Read and make sure you understand everything before starting.

How to remove the Front Panel assembly

Once you have disconnected the power cord, found a flat and clean table, etc, remove the line button (power on/off switch) by pulling it out. Remove the coax jumper connected to the R CHANNEL in and out SMA connectors: 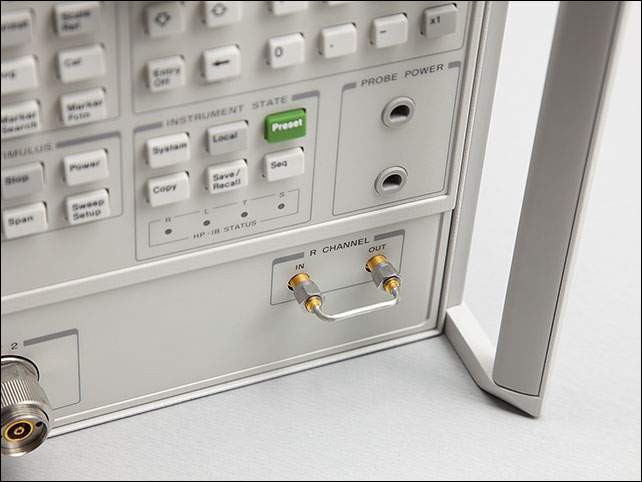 Now use a flat screwdriver to pry out the end of the trim strip and work from there to the other side until it comes off. 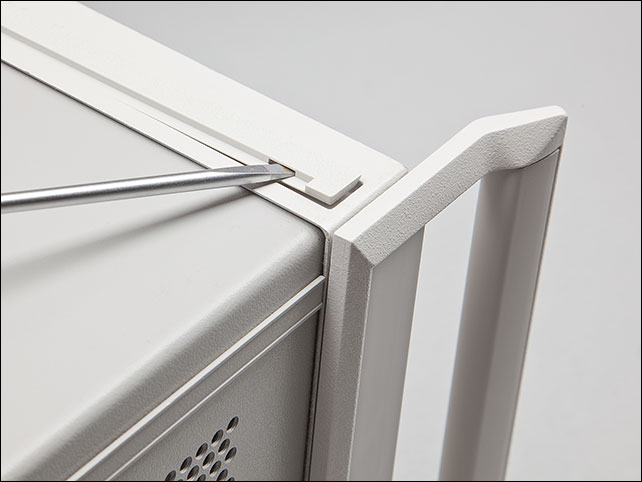 Remove three T15 screws from the top, you don’t need to remove the second one from the left when looking at the instrument from the front, the one that is directly above the soft-keys at the right side of the screen.

Remove three T15 screws from the bottom, you don’t need to remove the other four T20 screws you will find too.

Pull out the front panel over the test port and reference connectors grabbing it at the ground screw and the dial knob until you can grab it with your fingers from the side edges. Do not apply brute force, move one side or the other lightly until it slides out. You want to be extra-careful with the overlay being damaged by the connectors, it is extremely delicate. Place the front panel gently on the desk. Disconnect the ribbon cable and store everything but the front panel away. 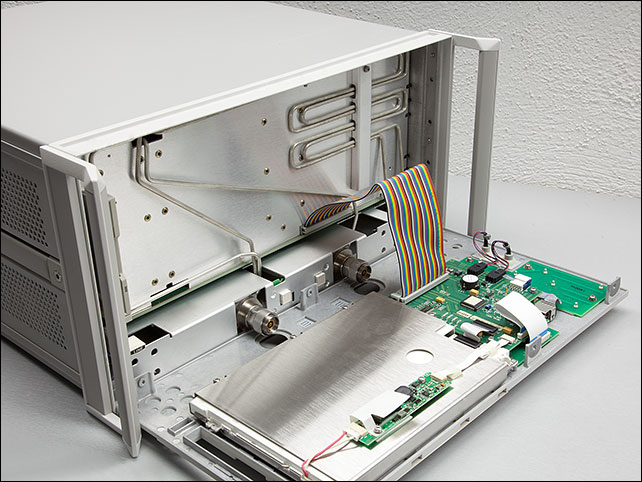 MY TIP: A great way not to loose screws or parts is to insert them where they belong with the part removed. This means putting the screws back to the front panel and putting the coax jumper back to the reference connectors. You’ll never again loose a screw or forget where it should go after days (weeks…) of having removed it. You can see here the coax jumper and you’ll find the screws in the next photo if you look carefully. 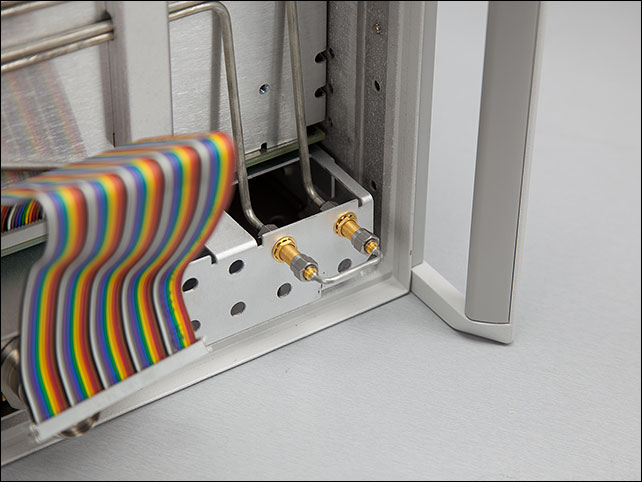 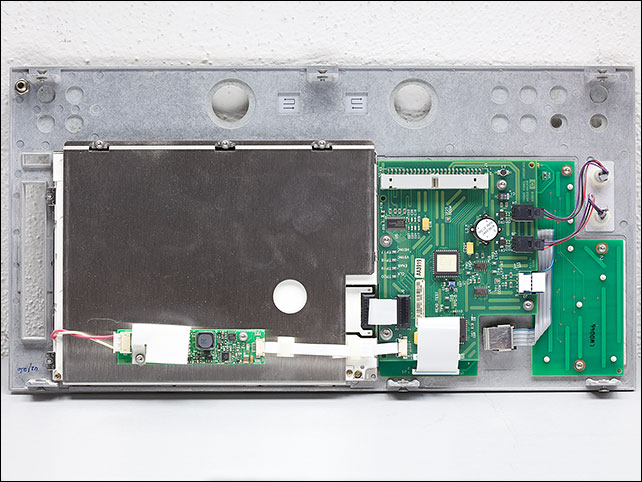 How to remove the LCD module

Disconnect the CCFL power wire from CN2 on the left side of the CCFL driver. 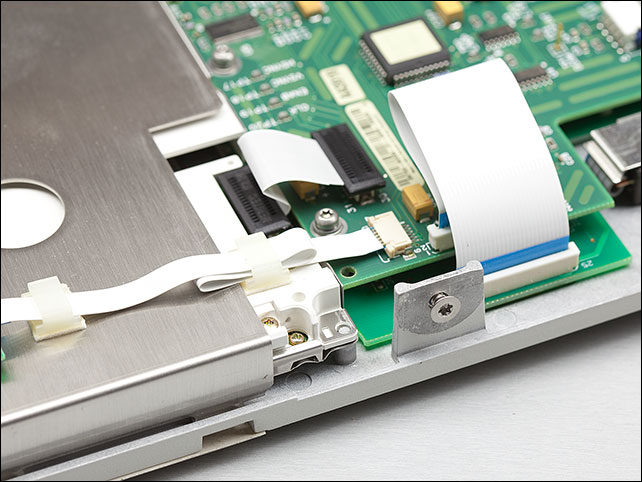 Remove three T10 torx screws at the opposite side, on the edge of the metal plate that holds the LCD panel in place.

Flip the metal plate towards yourself by lifting the sides with the screws, it is held by four tabs on the side closest to you.

Take the LCD panel out and place it on a clean, soft surface. You might want to place the three screws back.

Remove the short flat cable and re-connect it to J6 on the “FRONT PANEL INTERFACE” board so not to loose it. 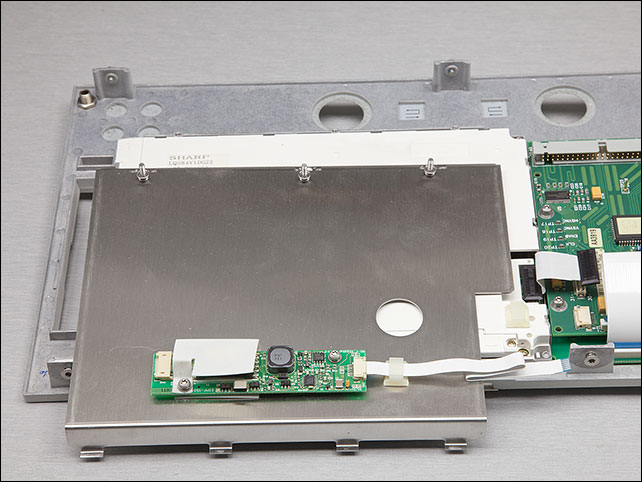 I have a separate article on how to modify this particular LCD module from CCFL to LED backlight so I won’t give details for that here. After the conversion, you migh want to put a connector on it for easy servicing. 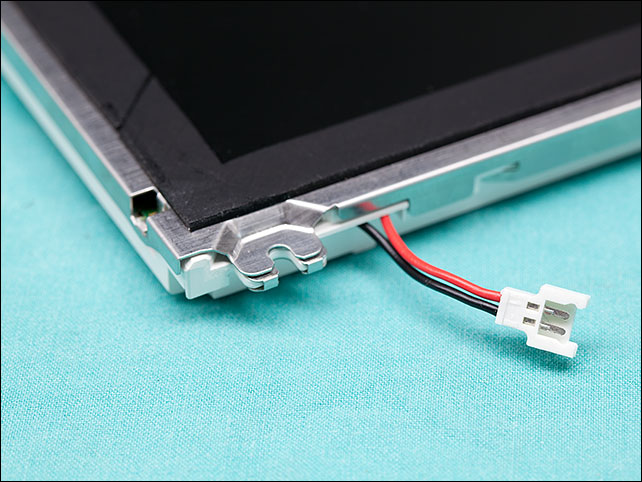 After the conversion is done, you can use a lab supply to check that with 100mA at around 8.2V the backlight works. I am using here a 6632B that had a very dim VFD that I replaced with an OLED module. 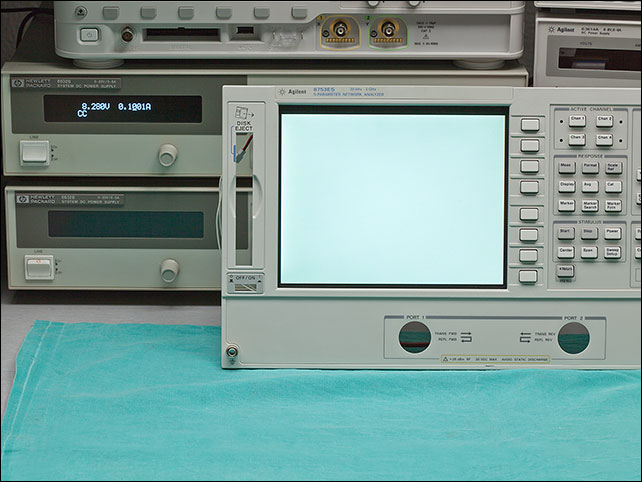 You did not think for a moment that we were going to put a low quality, ultra-cheap, switching regulator inside the VNA, did you?

Of course not. That’s why we will build a very simple constant current supply using a LM317 or its cousing LM350 (I just happened to have a few at hand). It could not be simpler. This IC’s life is devoted to creating a 1.25V voltage difference between its output and adjust pins. Math could not be simpler, you use a 12.5 Ohm resistor between output and adj. pins and you will get 100mA thru the resistor (ok, let’s use 12 Ohm which is a lot easier to find).

I’ve heard about some LM317 parts oscillating when using low-value resistors for sensing, you might want to try a different brand if you are unlucky enough to encounter this situation. 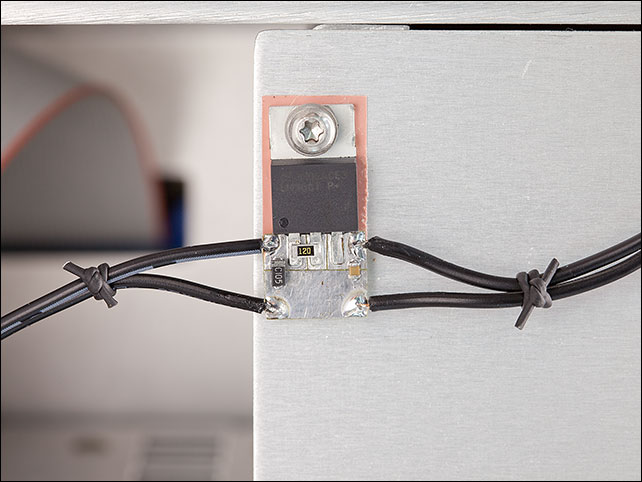 Just in case you are wondering, you really need to attach the IC to a heatsink. I used a 1206 size SMD resistor and that size is enough for the power it has to handle. I did not take the time to adjust for different emissivities but the following temperatures should be in the ballpark, and they seem safe: 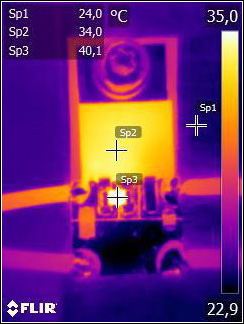 Where do we get power? 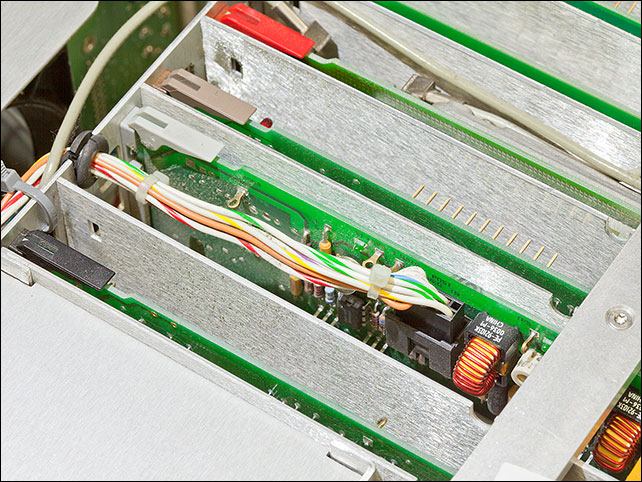 To connect a wire to that connector, we will re-use a common female receptacle, as found in PC motherboards. You can also solder the wire directly to the PCB but you may want to leave the PCB intact: 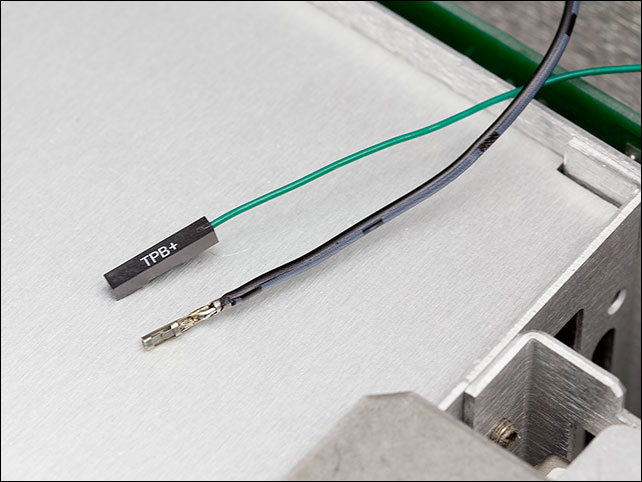 You will then route the cable carefully to the regulator, and the other cable from the regulator to the LCD. As for the rest of photos, click on it to see more detail: 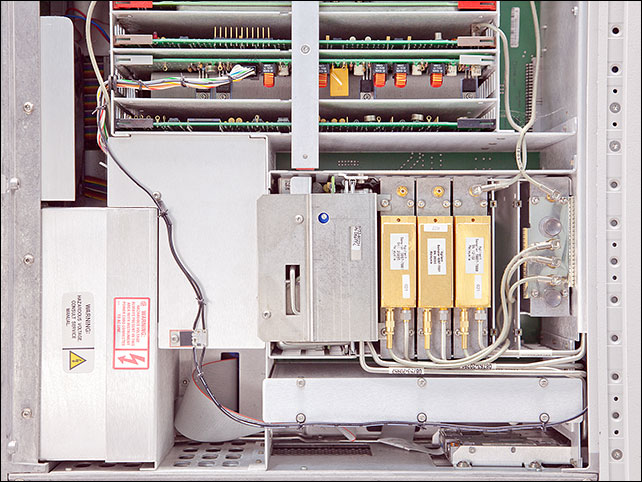 This is of course not a modification to make on color sensitive applications where you require accurate color rendition. But for this application, the results are great. I am colorblind (not joking!) so not the best person to evaluate colors on the screen but my wife, after looking at it for a fraction of a second, came up with the very techincal term “nice” to describe the result. She (most) probably was tired of waiting for me to get back from the basement so she might be lying, I’ve seen that happen before ;-). Seriously, the improvement over the dim CCFL, probably even when it was new, is impressive: 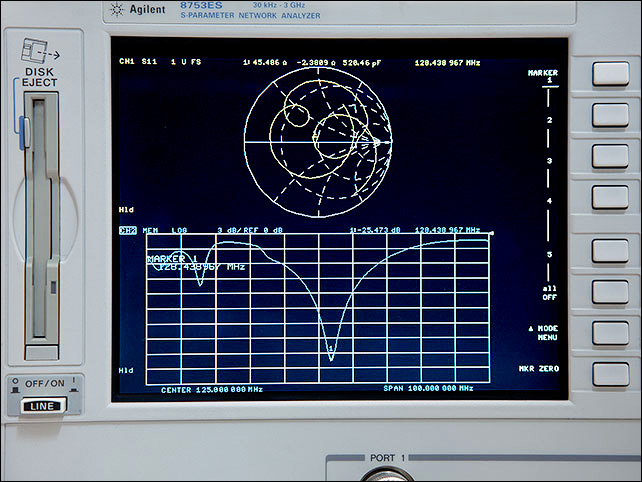 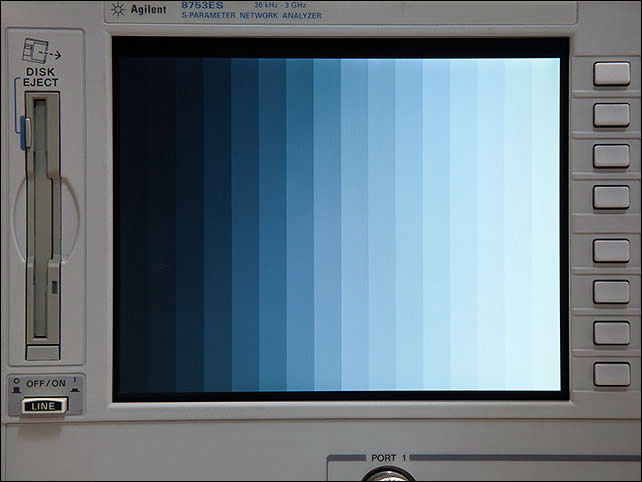 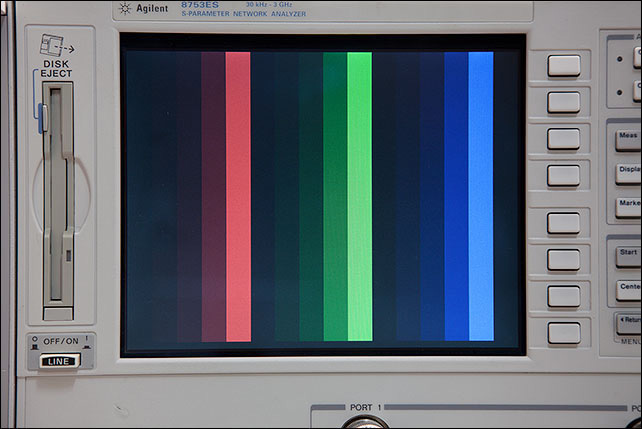 You will notice there is a brief moment on power-on of the instrument when the screen is filled with white. The original driver is commanded to remain off by the processor in the instrument until the screen is ready, while we just power it as soon as the power supply is on. We could take care of that but I don’t think the time to do it, specially to do it well, is worth it.

Another warning. When reassembling, do not use an electric screwdriver. You want complete control of tightenigh torque of the screws. And you don’t need to tighten them a lot. The casting of the front panel is not very strong and you risk stripping the threads.

If you have comments or feedback, let me know and you will help me improve this explanation.

Finally, I want to especially thank Vladan Temer for his help and support.